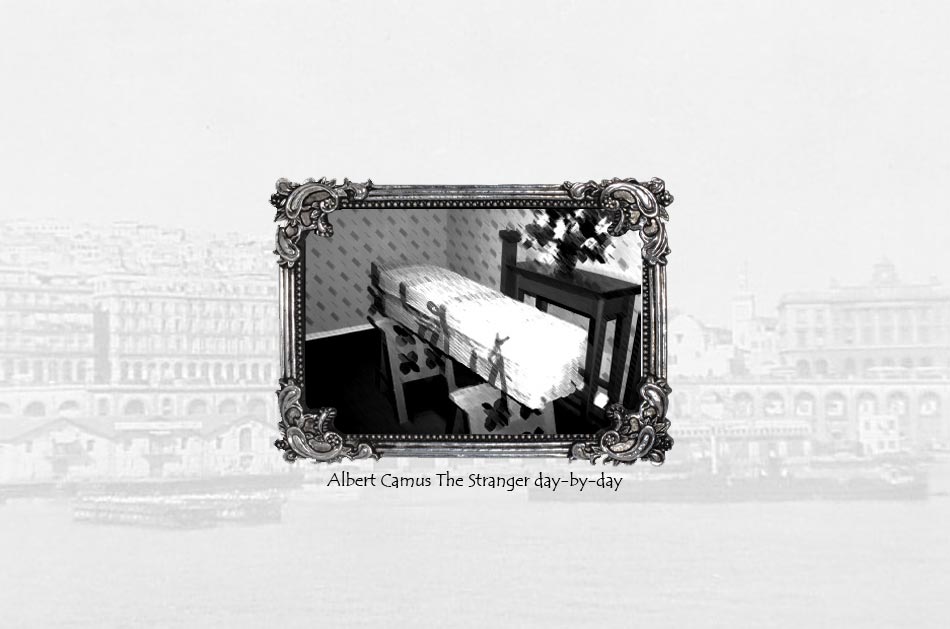 These posts are not intended to be some kind of study guide. Rather, they are merely observations. A much briefer version was be posted on the Camus Society’s Facebook page each day. L’Etranger is published as The Outsider in the UK and The Stranger in the US. There have been discussions over which is the preferable translation of the title (the pro-Stranger camp are winning, I believe); however, personally, I don’t think it makes much of a difference. I choose to use The Stranger because more readers know Camus’s book by that title. Just to be difficult, I choose to use Cross Purpose rather than The Misunderstanding for Le Malentendu – but that’s a story for another time.

Meursault has received a telegram from his mother’s residential care home. She is dead and her funeral is arranged. As is the custom, he travels down to the home to sit in vigil over her coffin during the night before her funeral. Although he wants to ‘see his mother’ he turns down looking inside her coffin. Rather than go to the canteen for dinner he has a coffee and smokes cigarettes. During the night he is joined by ten or so residents and has the strange feeling that they are sitting in judgment of him. The next day he walks in the searing heat to the church. An old man, his mother’s ‘boyfriend’, is permitted to attend but is ignored by all but Meursault. The old man, already described as being in a terrible state, is forced to run after the procession. He is crying and sweating when he arrives to the church and later faints. After the funeral Meursault catches the bus home to sleep for twelve hours.

The infamous first line of The Stranger. Meursault will be accused of treating his mother shabbily. Note that in Camus’s essay ‘Summer in Algiers’ published in the collection Noces, treating your mother well is a sign of ‘being a man’ – it is part of Camus’s highway code. Meursault’s apparent lack of interest in the precise details of his mother’s passing appears as shocking – until we read further. “I had a telegram from the home: ‘Mother passed away. Funeral tomorrow. Yours sincerely.’ That doesn’t mean anything. It may have been yesterday.” His not knowing exactly when his mother died is more due to a careless notification from the home than to any lack of caring on Meursault’s part. The telegram itself is a particularly callous way of informing a son of the death of his mother.

“I even said ‘It’s not my fault.’ He didn’t answer. Then I thought maybe I shouldn’t have said that.”

Meursault is unsure how to play the game. Funerals are set-pieces. How we react to the bereavement of others is also highly stylized. There are rules of behaviour that people need to understand. Meursault feels awkward playing this game. Not because he has strong feelings against doing so but because it doesn’t feel genuine. The motions he is going through seem wrong and he experiences a strange sensation of guilt.

Céleste and others feel sorry for him at the restaurant. Emmanuel, a friend from work, lends Meursault a black tie and armband.

Meursault has often been portrayed as a loner, a ‘stranger’ or ‘outsider’ by critics and commentators. Some have suggested that he is mentally disabled or schizophrenic. However, he has a circle of friends and other social relationships. He goes to the races with Céleste, the restaurant owner, and to the cinema with Emmanuel. He knows the latter man well enough to borrow clothes from him.

He dozes off on the bus journey.

Meursault spends a lot of the novel tired and sleeping.

“I wanted to see mother right away.”

At the trial the Warden of the home says that Meursault had not wanted to see his mother.

“You’ve no need to justify yourself, my dear boy.”

“When she was at home, mother used to spend all her time just watching me in silence.”

As would Camus’ own mother. As a child he once visited the home of a schoolfriend and was greatly surprised at how this boy’s mother would talk and laugh with them.

“Near the coffin there was an Arab nurse in a white overall, with a brightly coloured scarf on her head.”

But he doesn’t notice, until the caretaker points it out, that ‘she had a bandage around her head just below her eyes. Where her nose should have been, the bandage was flat. Her face seemed to be nothing but a white bandage.’ However, Meursault did notice that the caretaker had a white moustache, ‘beautiful bright blue eyes and a reddish complexion.’

Note that Meursault chats pleasantly with the caretaker and takes an interest in him. Meursault doesn’t act insensitively. It is the old man who makes an inappropriate comment regarding the need to bury bodies quickly in Algeria because of the heat.

Night falls and Meursault accepts a coffee. He thinks twice about whether it would be alright to have a cigarette and then decides that he can. The caretaker accepts one and they smoke together.

Meursault dozes off for a while.

Another reference to sleeping. Meursault sleeps off and on throughout the night. The first chapter ends with Meursault riding the bus back home knowing that he was going to ‘sleep for a whole twelve hours.’

About ten of the elderly residents come in to join the vigil.

They all sit opposite Meursault and ‘For a moment I had the ridiculous impression that they were there to judge me.’

We are introduced to Thomas Pérez

He is one of the residents and had become the boyfriend Meursault’s mother. He was not permitted to attend the vigil on doctor’s orders but is allowed to attend the funeral, a permission not usually granted to residents.

The funeral procession takes place during late morning. It is so hot that the tar on the road is melting. Pérez cannot keep up, a fact that only Meursault seems to notice. The old man hobbles along, takes shortcuts and when he finally makes it to the church, ‘Great tears of frustration and anguish were streaming down his cheeks’, he faints (like a dislocated dummy).

References to the funeral later in the novel

I have referred to the elderly people living at the home as residents. Meursault, however, refers to them as inmates. In the second half of the novel, when he is in prison, Meursault will spend more time thinking of this residential home that he does thinking about the crime that got him locked up. The comment by the duty nurse: ‘If you go slowly, you risk getting sun-stroke. But if you go too fast, you perspire and then in the church you catch a chill’ is recalled later in prison. Chapter Two (of Part II) ends with the line, ‘I then remembered what the nurse said at mother’s funeral. No there was no way out and no-one can imagine what the evenings in prisons are like.’ The novel ends with Meursault thinking about his mother and why she’d “taken a ‘fiancé’ and why she’d pretended to start again.”

In his 1955 preface to The Stranger, Camus writes that “the hero of my book is condemned because he does not play the game.” We will examine this idea further but for now, we can see the idea of ‘playing games’ is established from page one.

The first chapter looks at what could be called social games. Meursault is expected to react in a set way to the death of his mother. The people in the home have their expected roles, as does Meursault’s boss. Had Meursault wanted to look inside the coffin and chosen to go and eat dinner in the canteen that would have been acceptable. Not wanting to have the coffin opened and drinking café au lait next to it are, apparently, unacceptable. Meursault has a right to ask for days off to go the funeral but no more than is deemed acceptable. When he later realizes that because of the weekend he will be getting four days off he understands his boss’s annoyance. The rules of the funeral game are fixed. 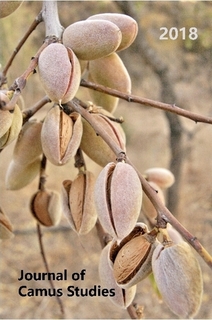